September 22 was National Elephant Appreciation Day.  A day to celebrate the gentle giants whose demeanor seems oh so wise.  Even the young ones seem to possess some great intellect as they slowly plod along in their wrinkled skin and tough, calloused exteriors.  They say that an elephant never forgets.  Scientific American says it’s true… elephants have amazing recall abilities… and it somehow provides them with the impressive ability to survive late into their eighties.  Many researchers also report on an elephant’s remarkable sense of empathy, and their unusual respect for fallen members of their herd. Elephant families are matriarchal in nature and elder females are known to support younger mothers; often mentoring them in parenting skills or participating in funeral rituals for young calves that have died.  Many scientists speak of elephant graveyards and the animal’s peculiar behaviour surrounding the death of aged loved ones. 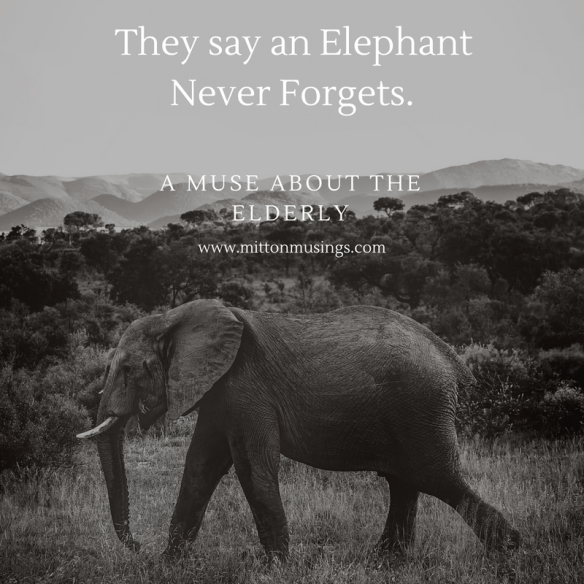 They say that an elephant never forgets.  Sometimes we forget.  We giggle at “senior moments” and “getting old and forgetful”… but for over half a million people living with dementia in Canada, memory is no laughing matter.  As of 2016, the combined health-care system and out-of-pocket caregiver costs are estimated at $10.4 billion per year. By 2031, this figure is expected to increase by 60 per cent, to $16.6 billion (via Alzheimer Society of Canada).  In 2013, Bob Barker, famous Price is Right host and elephant advocate, provided $1 million of his own earnings to transfer three of the Toronto Zoo’s elderly elephants to a sanctuary in California.  I remember the controversy and outrage.  He felt they needed to live out their remaining senior years in freedom.  And so I muse:  The comparison between senior elephant and senior human healthcare somehow seems unbalanced.

For many of us in this so-called “sandwich generation“, we are torn between providing for our young children, and caring for our aging parents.  I have so many mixed emotions about this topic… I know the system is wrong.  Yet, I am just as guilty at neglecting seniors as the next.  I grow impatient in the check out line as elderly patrons struggle to push the buttons on the debit machine.  I get annoyed when that slow driver at the stop sign has taken way too long to decide to turn.  I’m a little sickened when the little old lady on the subway smells slightly of used towels and moth balls… or worse.  I don’t have time to explain how to do this seemingly easy task, yet again.  I dread the conversations where I have to pretend that I haven’t heard that same story a hundred times.  Still, I am saddened by the fact that so many seniors spend their days lonely and alone.  I am angry with myself that I don’t take time to listen and be patient.  I am disheartened when a person who once had so much dignity and grace,  has lost the ability to care for themselves.

My dear mother-in-law would have celebrated her birthday last week.  We lost her earlier this year when she was taken home to Heaven.  Yet, to some extent, we lost her  many years before that, as her dementia claimed not only her mind, but eventually her body.  They say that an elephant never forgets.  Grandma sometimes forgot.  She forgot where she put her purse.  She forgot to turn off the water in the sink.  She forgot the words.  She never forgot her beloved, though… her husband and full time caregiver who so desperately misses her that it makes my heart ache.

We know we are to honour our parents and care for the widowed, the poor, and our neighbours (Matthew 19, Leviticus 19:32).  Many of you are devoted caregivers and serve others so faithfully!  I applaud you.  It is a very special person, gifted by God, who can serve our senior population with patience, love and honour.  Don’t ever stop using that gift!

Personally, I struggle with it.  I used to say that I “didn’t do people”.  And I certainly didn’t do “old” people!  The animals I worked with somehow seemed less threatening than humans.  However, I soon learned that every animal came with “a people”.  I’ve had to learn that helping creatures also meant helping the people that came along with them.  Why do you think so many nursing homes have special animal days?  Perhaps our churches could learn a little bit about non-judgmental, unconditional love, and unending patience from those companion animals.  They say that an elephant never forgets.

In preparing for this post (and my apologies if it seems a little everywhere… I read a lot and have lots to muse about in this emotional topic!) I read a touching post from the Global Sanctuary for Elephants blog.  In it, the author states that through watching the elephants, she has learned that “….death is part of life to be honored and even revered as one of the most sacred elements of life. …”  How much more should we, as believers, honour those who have served so faithfully?  Should we not be providing sanctuary to those who have done their work diligently and have run the good race?  Sanctuary.  By definition, it is a place of refuge and safety.  Oh, I pray my home and my church is such a place for the widows and the orphans.  A place to rest.  A place to be comforted.  A place to feel safe.

They say that an elephant never forgets.  They say that elephants have the capacity to recognize themselves and others.  Even years later.  They say that elephants will mourn the bones of lost elephants when they come upon their so-called “elephant graveyards”.  As I grow, and mature and age, will I still recognize myself as a daughter of the King? Prized as one who is sustained by the great I AM, even into my old age and grey hairs? (Isaiah 46).   Will I remember to honour the old, tired bones of the seniors in my community and give them the respect and comfort they, too, deserve as fellow beloveds?

I pray, like the mighty elephant, that I too, will never forget.

5 thoughts on “They Say that an Elephant Never Forgets”