Greetings!  It’s been a hectic week and I am just catching up on a few things (like laundry and housecleaning… what an exciting life I lead, eh?).  We are almost into our third week of our 30 Days of Blessings challenge and I am being so encouraged by how people are being blessed!  One of the challenges we recently enjoyed was to discover all about plants!  Now, I am no green thumb, but I do like plants.  It’s just crazy how diverse they are.  So many colours, shades and textures.  I garden a bit… but I’m really too lazy to tend the land a whole lot.  Houseplants are my jive.  I don’t have the space for a jungle, but we do have a few potted beauties hanging around.  The recent prompt encouraged me to buy two more little succulents… they are all the rage right now!  Seriously… How many Instagram pics have you seen with that tiny green thing on the perfectly clean office desk?  It’s so unreal, people.  Do computer desks look like that?  Not mine.   Although I must say, one of my new little guys looks like he needs some googly eyes and a sombrero… it’s so funny!

I have a few other succulents, too, which I love to share as they are so easy to propagate.  If you need some help with that, you can read about my simple teacher’s gifts here.  I once “adopted” an Aloe Vera plant that was huge when I got it.  I have shared that one so many times that I only have a few sprigs (apparently the correct term is “pups”) left.  I will have to leave it alone for awhile to grow back.  But, I digress, we are here to talk about my cacti!  I received two little cacti as a souvenir from Arizona.  The hubby brought them back from a trip he took several years ago.  Recently, they were beginning to look a little sad.  One was definitely leaning over (yes, I stuck an old knitting needle in the soil to prop it up!) The other was starting to spot a tad in the middle where it had touched the other one.  They had grown too big for the shallow dish they were in and needed to be re-potted for more space… only issue… they are very prickly!!

I had tried once before to re-pot my cactus using tongs to prop it up and some gloves… but the spines went through the gloves!  Someone told me a towel would work… but the spines stuck in the towel.  And so… YouTube became my friend once again.  A lovely expert from California (all things cacti there!) re-potted a huge, tall, spiky beast using bunched up newspaper… and voila!  It worked!   I carefully dug around the bottom with a fork and used my oven mitts and some crunched up newspapers to lift the cactus out.  It’s pot partner immediately flopped over in shear depression at the thought of being left alone forever — but was soon rescued as well, and placed back with it’s beloved in a new home.  Unfortunately, because I had procrastinated moving them so long, the roots had grown slightly sideways, so the plants are still slightly leaning and currently propped up again.  I am hoping with more room to grow, they will grow fat and healthy!  Newspaper hugs did the trick! 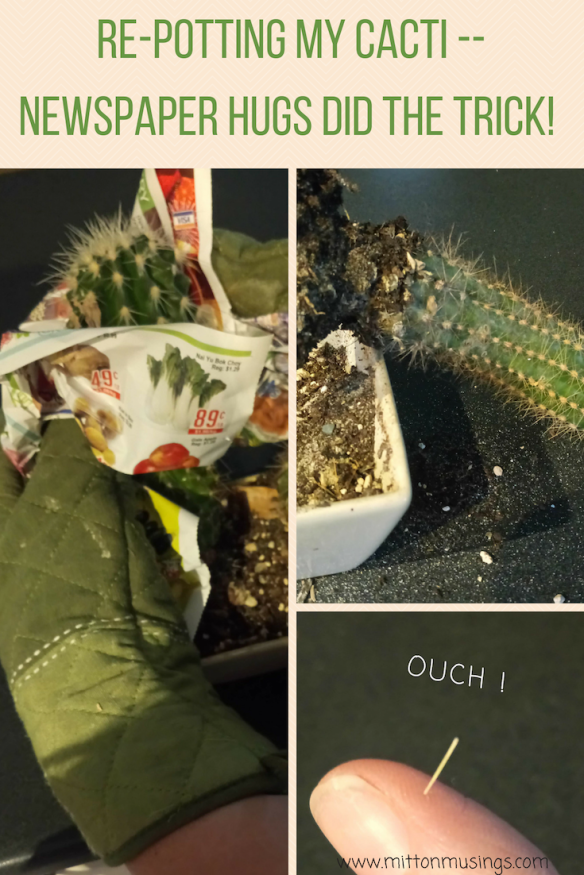 What about you, my friend?  Ever get stuck in a pot too small for your liking, but too afraid of getting poked to move on?  Ever feel like you are being prompted for something bigger, somewhere you can bloom and flourish,  but doubts and fears keep you leaning over because you’ve procrastinated too long?  Or are you afraid to get poked by people who want to see you fail?  The Bible tells us to “Be Strong!  Be fearless!  Don’t be afraid and don’t be scared by your enemies, because the Lord your God is the one who marches with you.  He won’t let you down and He won’t abandon you.” (Deuteronomy 31:6 (CEBA))  How encouraging!  I know, I know, you are right — easier said than done.  So how do we turn the hard parts to our advantage?  Take the example of our plants.  Even though the spines are added protection for the plant, cacti use their spikes to retain water as well — a necessary resource in the desert (because they lack leaves).  Our struggles often produce defensive spikes that keep our predators at bay.  We must learn that even though times are tough, our defenses can become our greatest assets.  They help us survive in the desert of life.

Sometimes, we forget.  We get stabbed with the consequences when we are not protected.  I got a jab by one tiny spine through my oven mitt as I propped up my leaning cactus without the added protection of the newspapers.  I tried to do it on my own.  When our Godly defenses are down, we sometimes react without being properly guarded.  And it hurts… let me tell ya!  So use your newspaper to wrap one another in love.  Hug a cactus with all the encouragement and grace you can find!  Cushion them with space and then gently lift them forward.  Only then can you begin to see them flourish and bloom in their new space!

5 thoughts on “How to Re-pot a Cactus (Without Getting Poked!)”