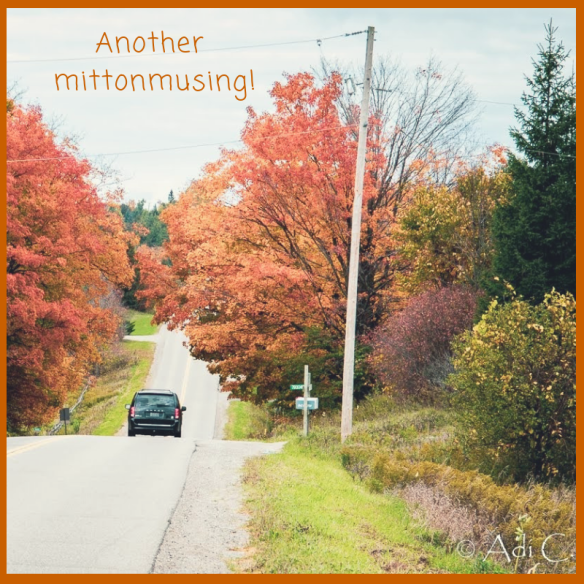 Our wayward firstborn was recently home from University for reading week.  It was lovely to have her, even though we have already given away her room to her younger brother.  She had to put up with the basement.  Nonetheless, on my trip to pick her up, the GPS app on my phone took me through some winding country roads.   I’ve made this two hour trip hundreds of times before, but for some reason that day, I was relying on my phone to pull me out of the back roads and get me to somewhere more familiar.  I seemed to be wandering in farmland for way too long… I began to pray that the power wouldn’t totally seep out of the phone before I arrived.  I was lucky — all of a sudden I came upon civilization and breathed again.

It was a dull day when I made that drive all on my own.  The skies were overcast and the wind was whipping around as rain threatened the skies but didn’t appear.  At two different stretches of highway, we seemed to have a “leaf storm”.  The leaves blew around the vehicle in great swirls and gusts as if they were snowflakes driven by winter winds led by Jack Frost himself.  It was quite unusual, really.  Yellow leaves mostly, from the ash trees of the area.  Twice I seemed to be the only one on the back roads, engulfed in this inferno of flying leaves.  Like something out of the Wizard of Oz.  I was not in Kansas anymore.  Or anywhere I was familiar with either, for that matter.

When the leaf storms subsided, I took note of the fields surrounding me.  I was taking the opportunity to reflect a little as the two hours of peace and quiet was a welcomed rest for my busy soul.  (And truth be told,  I was trying to figure out where the heck I was with respect to my final destination!)  The farmers fields were a dull yellow… dry corn husks left to be plowed under soon.  Flat, drab, and lifeless,  surrounded by the autumn forests of reds, greens, and browns.  Houses dotted the perfectly paved roads.  Nothing of great note.  Except for two black silhouettes on the horizon. 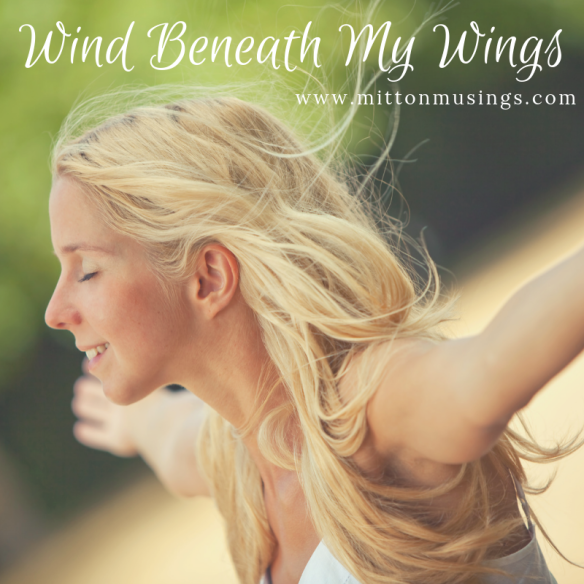 At two different points on my drive, I witnessed two giant birds soaring in the wind.  They were probably hawks or falcons.  Maybe one was an osprey — we often see their giant nests atop telephone poles in the area.  The first one I noticed seemed to be gliding effortlessly through the field.  Guided along with the wind beneath its wings… seemingly without a care in the world.  The other was also majestically soaring — but swooped up and down almost as if it was having fun in the windstorm!  Have you ever stuck your arm out the window of a moving car?  Okay… not recommending it … not safe…. don’t do this at home… blah blah… But if you ever have… you will know the feeling of the wind beneath your “wings”.  That pressure that pushes you back but encourages you forward… and you dip and rise your hand like in the commercials of pretty girls in convertibles advertising some vacation spot in sunny Aruba.

It struck me, as I watched this big bird for the brief few seconds as I drove past, that this is what Isaiah was talking about when he says that those whose hope is in the Lord, will renew their strength and soar on wings like eagles!  (Isaiah 40).  This big bird was dipping and diving and seemed to actually be having fun in the wind!  So often we get caught up in our daily grinds of work, ministry, kids, etc., and life seems to be taking us on the winding back roads.  We get overwhelmed by the “leaf storms” that blow our way and get confused by our whereabouts in what should be the familiar.  We get tired.  Yet, God is so much bigger than we can even imagine.   He becomes the wind beneath our wings.  Then we are carried and soar.  Dipping and diving as our strength is renewed yet again. Apparently there are 4 different species of eagles in Palestine.  It’s no wonder that the bible authors make reference to their power, might and majesty, and uses them as our example for the never tiring Lord who renews our strength.  I’m pretty sure my birds were not eagles, but big birds nonetheless.   Even the Bette Midler song from way back, makes the bible reference of soaring eagles.  Who is your hero today?  Who is the wind beneath your wings when your strength is failing?  Rest well in knowing that God is big enough to carry you through the storms and uncertainties.   Enjoy the dips and dives as you swoop through the dull fields of leftovers.  May He be the wind beneath your wings!